On December 5, 1954 a group of twenty-one people met together in a small twenty-five foot by twenty-five foot rented building on State Highway 183 (Now Texas 10) in the small community of Hurst, Texas. That rented building had just days before been an auto garage. The grease and oil stains had to be removed from the floor prior to the meeting. Rev. Comal Wallace delivered the morning message. At the close of the close of the service he requested that all those who were interested in organizing a church fill out a card. All twenty-one signed the cards given to them. An offering was received to pay the rent on the building, chairs, and piano.

The following Wednesday evening the group once again assembled. Motion was made to go into conference and Bro. Wallace was nominated and elected as Moderator of the meeting.

The result of the meeting was for the group to elect to organize into the Hurstview Baptist Church and to call Rev. Comal B. Wallace as Pastor. Except for a six-month period when he took a leave of absence to assist a former church he had founded in Agnes, Texas, he remained Senior Pastor until 1998 when his son, Dr. Johnnie E. Wallace, succeeded him. Dr. Comal B. Wallace now serves as Pastor Emeritus.

God continued to bless the church. By 1956 larger meeting facilities were required. A committee was elected to find and purchase expansion property for the church. After much prayer it was determined that property for sale in the undeveloped Anderson Addition, approximately 500 yards to the northwest of the Quonset building, was the location that would please God.  Three lots were purchased on what would become the corner of Anderson Street and Treadwell Drive. The church paid cash for the property. Following this a loan was secured for $6,000.00 and construction began. The city of Hurst had guaranteed that street access and utilities would be constructed by the time the building was ready to occupy. However, it was two-and-a-half years later before the streets were constructed. During those years access to the church was obtained through an individual's property, which fronted then Highway 183 (Today it is designated TX Hwy 10). Every time it would rain tow trucks would be required to extract cars from the mud. Yet, God blessed and the church continued to grow.

In the fall of 1957 plans were made to construct a Sunday School wing. A church tabernacle style building was being demolished in Fort Worth so they could build a larger auditorium,. The church purchased that building and the Pastor and men of the church undertook the demolition, Taking special care to preserve the lumber and building materials the old building was moved to Hurst and the lumber was used to construct the Sunday School Wing.

By 1965 the church was far beyond housing the growing congregation and plans were made to build another auditorium. In 1964 construction was begun and completed. In 1971 two-and-a-half acres were purchased to the south of the property and youth facilities and a Family Life Center was erected. This property was sold the Hurst Boulevard Church of God in 1997 in preparation for moving the facilities to a location with greater visibility. 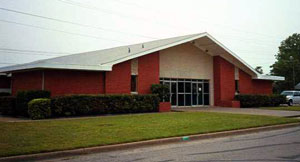 In 1998, after 50 years in the ministry, Dr. Comal Wallace felt the need to spend more time in evangelistic work. The Church called as Pastor Dr. Johnnie E. Wallace.

For over 55 years the church has had one motto: Anchored To The Rock, Geared To The Times. Today it still clings to the same Rock. And, Hurstview Baptist still is proclaiming the same Gospel. The methods of proclamation may have changed but the message has not: “Jesus Christ, the same yesterday, today, and forever.”